Your house will smell amazing with this Crock-Pot potato soup. The slow cooker makes this meal super-easy: Just dice a few fresh ingredients, pop 'em into the Crock-Pot, and wait for the magic to happen . . . It’s literally comfort in a bowl.

As the kids hang their backpacks after school I hear excited variations of:

It smells soooOOOooo good in here.”
“Yum — what are ya making?” and
“Mom, when’s dinner?”

There are certain cold-weather staples that simply warm your soul.

I admit, that phrase seems cliché, but my mom's Loaded Potato Soup is one of those cold-weather staples. It's become a fast favorite for my girls. And even though I've made it for my family for years now, they still lovingly call it Grandma's Homemade Potato Soup.

While I love my mom's potato soup recipe, I often don't have the time to tend to it throughout the day the way she did. So . . .

Below is a variation of Grandma's Homemade Potato Soup made simple for the Crock-Pot. Our family has slowly perfected it to be pretty darn close to the original taste — but with less work.

A quick heads-up: This recipe does include a bunch of freshly diced ingredients, but don't let that stop you on a busy day. Just check out the 5 time-saving tips at the end of this post if you're in a pinch! (And these days, who isn't?)

How to Make Potato Soup in the Slow Cooker

While Grandma's recipe was fairly complex, making this version of her loaded potato soup is as easy as 1-2-3:

1. Slice, dice, and get that Crock-Pot potato soup simmering!

The first step is simple, but it's the most time-consuming part of making slow-cooker potato soup. I promise this homemade potato soup is worth it!

Get your children involved when making homemade potato soup. It will save you time and, more importantly, it's an excellent opportunity to bond with your kiddos.

This easy Crock-Pot potato soup — with real hunks of potatoes — also has chopped celery and onions. Once you've got everything diced, it's time to get this hearty, ham-and-potato soup a-cookin'!

Start by adding your potatoes to the slow cooker. Next, add your chopped veggies and a package of hickory-smoked ham (or diced smoked slab bacon is AMAZING too) on top of the potatoes. Some seasoned salt and cracked black pepper mixed with a dash of cayenne pepper and a pinch of red pepper flakes give this recipe additional warmth. Finally, cover your base of ingredients with chicken broth and simmer on low for 6–8 hours.

2. Make a super-simple roux to thicken your slow-cooker potato soup.

Grandma's original stovetop potato soup recipe called for a deliciously indulgent butter-and-flour roux, but I use an alternative approach with my Crock-Pot potato soup . . .

About an hour before serving, turn your slow cooker on high.

Now, let's make that roux! (I promise it's simple.)

Warm 2 cups of milk either on the stovetop or in the microwave. Gradually whisk the flour into the milk until it's smooth and lump-free. Stir your slow-cooker roux into your potato soup, and cook on high for an additional 30–60 minutes.

If you decide that you'd like mashed potato soup instead, gently use a potato masher to mash your potatoes right in the slow cooker. (I've even heard of people using an immersion hand blender [A.K.A. stick blender] to cream together the ingredients to make a cream of potato soup.) Our family loves the big, hearty potato chunks, so I haven't tried a mashed or creamed variation yet.

One last mom-to-mom tip — If I'm making hearty, cold weather, comfort food, sometimes I just own up and say:

In a heavy cream, tons of butter, or bacon-and-cheese scenario, I'll offer the kids apple slices as a pre-dinner snack or serve a good-sized salad BEFORE serving dinner. Which leads us to Step 3 . . .

I love this potato soup recipe "as is," and I like a healthy broth variation with spinach, too. But on a dreary Wisconsin day, nothing's better than a hot bowl of homemade potato soup topped with a dab of sour cream, some sharp cheddar cheese, and freshly-made bacon crumbles.

Do your kids love to shred cheese as much as mine?

Slow-cooker meals are THE BEST because they're so simple to whip together. However, there's a catch to this "one-pot-wonder" approach to making family dinner:

No matter how colorful and enticing your ingredients look going into the Crock-Pot, once cooked, the recipe often ends up coming out a bit monochromatic. 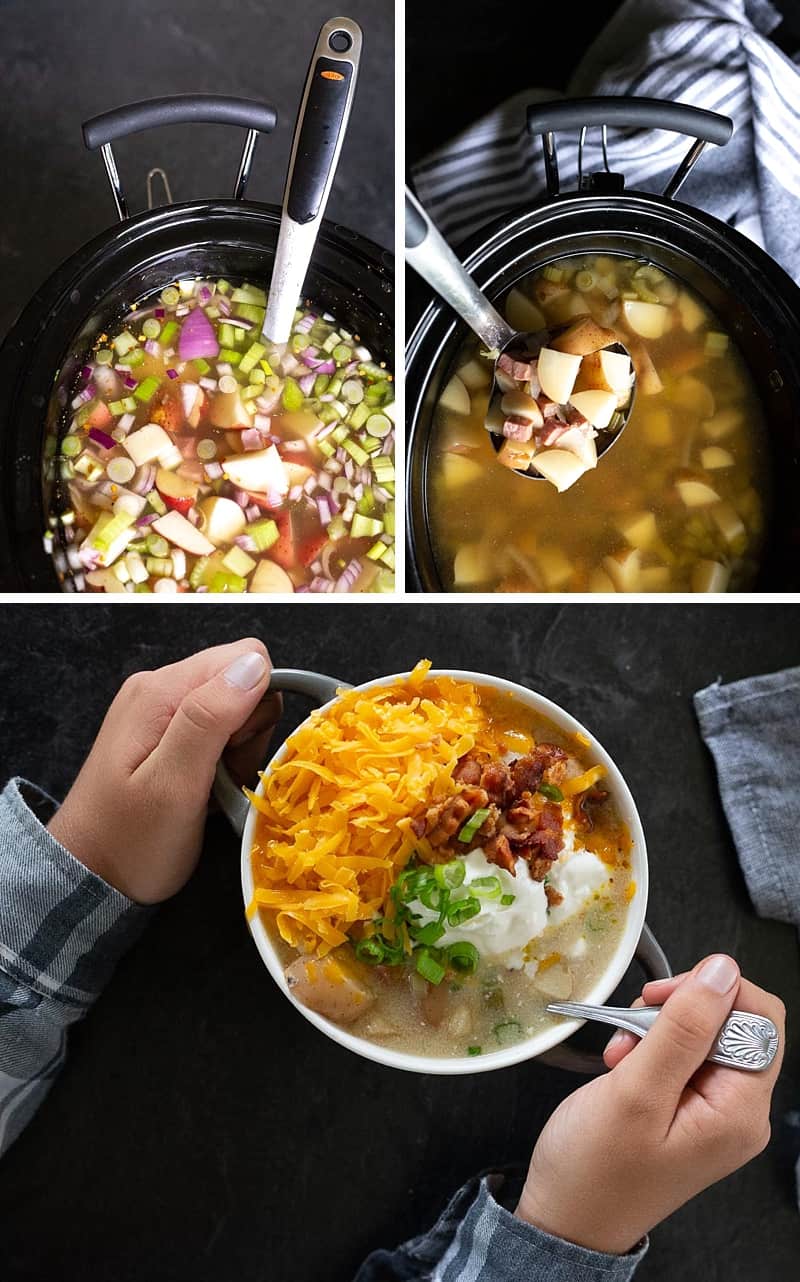 Whether you're eating your Crock-Pot potato soup "fully loaded" or simply straight-up, make this the best potato soup recipe —

Add a dash of love to your slow-cooker dinner.

Disclaimer: Nutrition calculation is automatically calculated and may be inaccurate.

What to Serve with Slow-Cooker Potato Soup

Headed to the grocery store, but not sure what to serve with your loaded potato soup? Here are a few of our family’s favorite things to have with this Crock-Pot meal:

Sometimes it feels like there aren’t enough hours in the day. If you’ve got a busy day ahead and you have no time for dicing, but still want to get a homemade meal on the table, consider using a few of these time savers when making this Crock-Pot dinner:

No matter how far you’ve strayed from the town you grew up in, I bet there’s a recipe that reminds you of spending time in your childhood home . . .

Working in the kitchen with my kids on Papa’s Ahh-mazing Crepes or on crisp German Potato Pancakes or Slow-Cooker Beef Stew with thick egg noodles like Grandma Gertrude used to make . . . it’s such a powerful, family-bonding experience for me and my girls.

I love sharing our handed-down family recipes with you. Grandma’s Homemade Potato Soup is another one of our absolute favorites. It’s a MUST-HAVE fall staple at our house. I sure hope you enjoy it as much as we do — and that you find fun, little ways to make this recipe all your own!

P.S. If you try the recipe, tag us on Instagram @letslassothemoon or use the hashtag #EasyPeasyFood so we can find it! I hope your kids like it as much as my girls do! 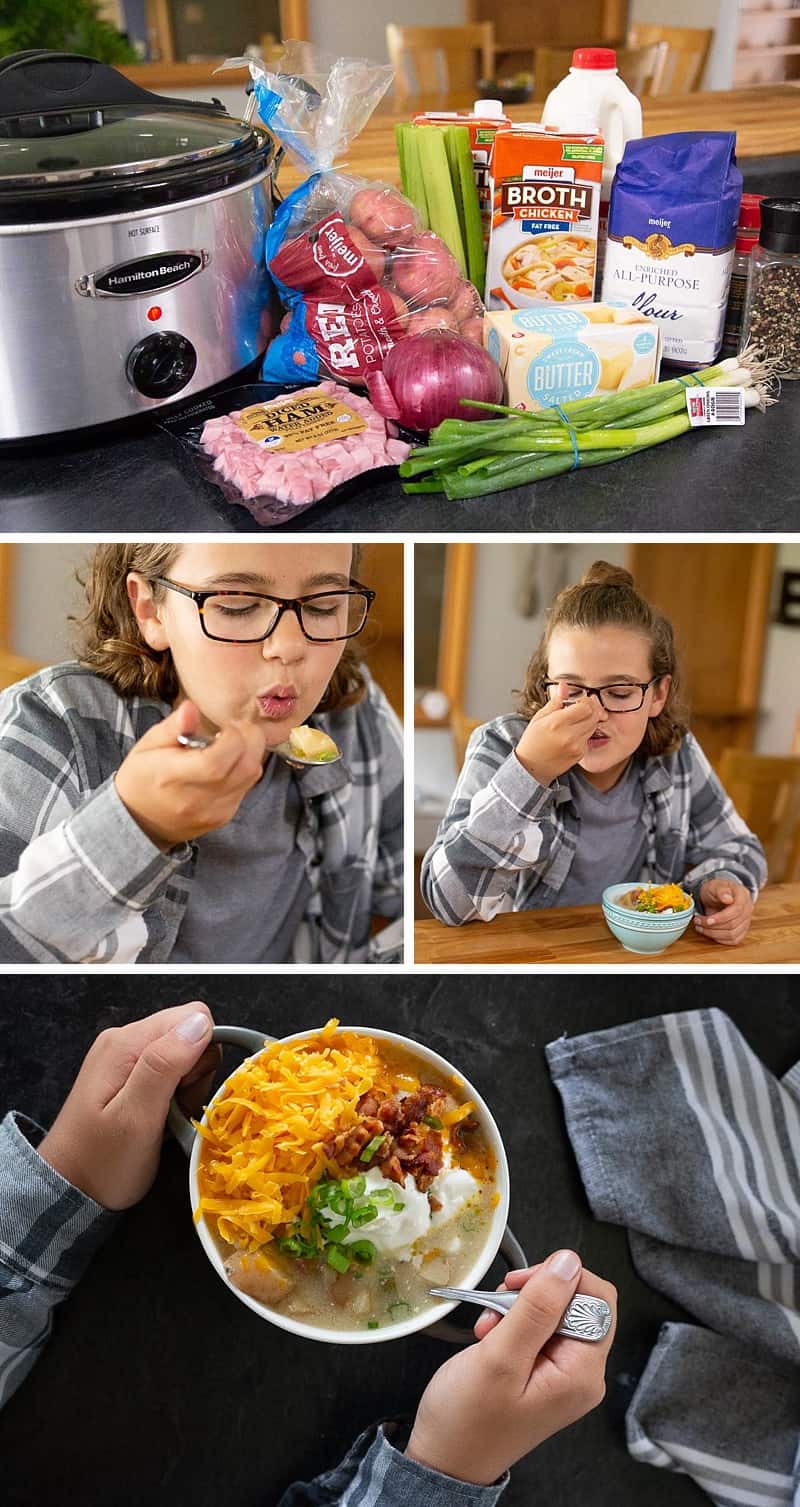 Disclosure of Material Connection: This is NOT a sponsored post, but I am a Meijer Blog Ambassador. Which means the company sometimes compensated me via a cash payment, gift, or something else of value to write sponsored content. Regardless, I only recommend products or services I use personally and believe will be good for my readers. I am disclosing this in accordance with the Federal Trade Commission’s 16 CFR, Part 255: “Guides Concerning the Use of Endorsements and Testimonials in Advertising.”