Learn how to make THE BEST Bourbon BBQ Sauce and Crockpot Ribs for your next family get-together or holiday party.

Whether your planning for an upcoming holiday weekend or just a day of family fun, this super simple Bourbon Ribs recipe is a win-win.

This Crockpot rib is my favorite approach because it allows you to slow down and enjoy time with friend and family. You simply pre-cook your ribs in the slow cooker to perfection and then grill the day of your get-together. Plus, these Bourbon BBQ Ribs taste amazing.

Restaurant-quality BBQ ribs can be as easy as 1-2-3 if you follow the steps below!

How to Make The BEST Crockpot Ribs With Bourbon BBQ Sauce!

Shall we get started?

1. Create a one-of-a-kind dry rub for ribs using ingredients you probably already have in your spice cabinet.

There are so many different rib rub recipes available, but this one you can whip up with spices you’ve already got on-hand. This pork rub has got traditional season salt (to cover the bases), brown sugar (to complement the bourbon), along with cayenne powder (for a dash of spice) and… an optional teaspoon of instant coffee (for that “What is this deliciousness?” mystery-flavor).

Any time you make BBQ ribs, it is important to remove the membrane on the back BEFORE applying the spare rib rub. If you’re not 100% sure how to do it, watch this quick video tutorial. It is not hard to do and it allows your rib seasoning to penetrate the meat as it cooks. Plus, it will make your barbecue ribs tender and easy to cut later!

After you’ve prepped the meat, lay it on a sheet of parchment paper and cover in the BBQ rub. They call it pork rib RUB for a reason; get that spice blend worked into the meat. This brown sugar rub for ribs is my absolute favorite. I love the sweet and spiciness of this ribs recipe! 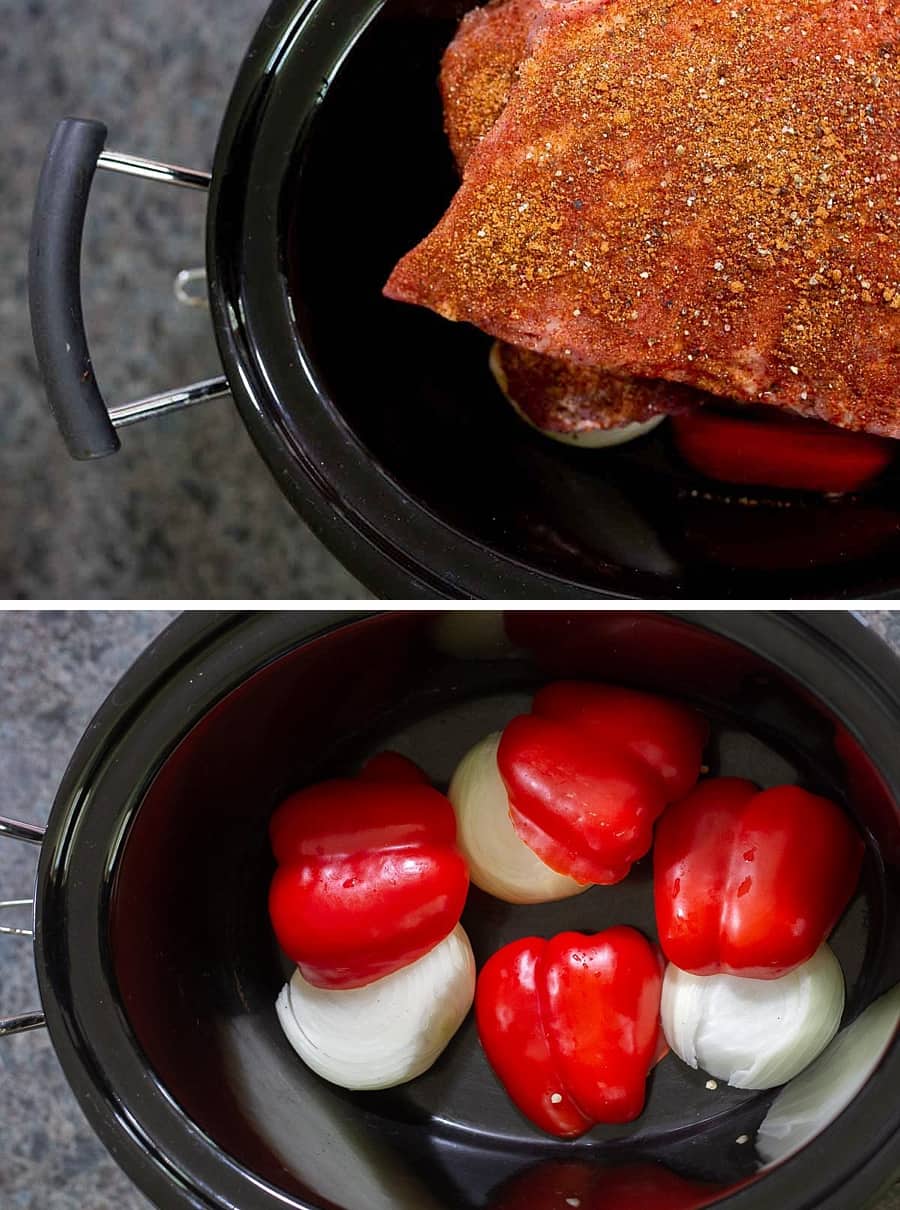 2. You’ll need to set up your crockpot a special way for this Slow Cooker Pork Ribs recipes!

We’re going to let these slow cooker spare ribs cook to perfection over the course of six hours, but this BBQ ribs recipe requires an unusual crockpot set-up.

Before we add the meat to the crockpot, we’re going to create a bed of flavor for your BBQ pork ribs. For this crockpot spare ribs recipe to work properly, you need to layer the base of your slow cooker with large slices of rep pepper and onion. 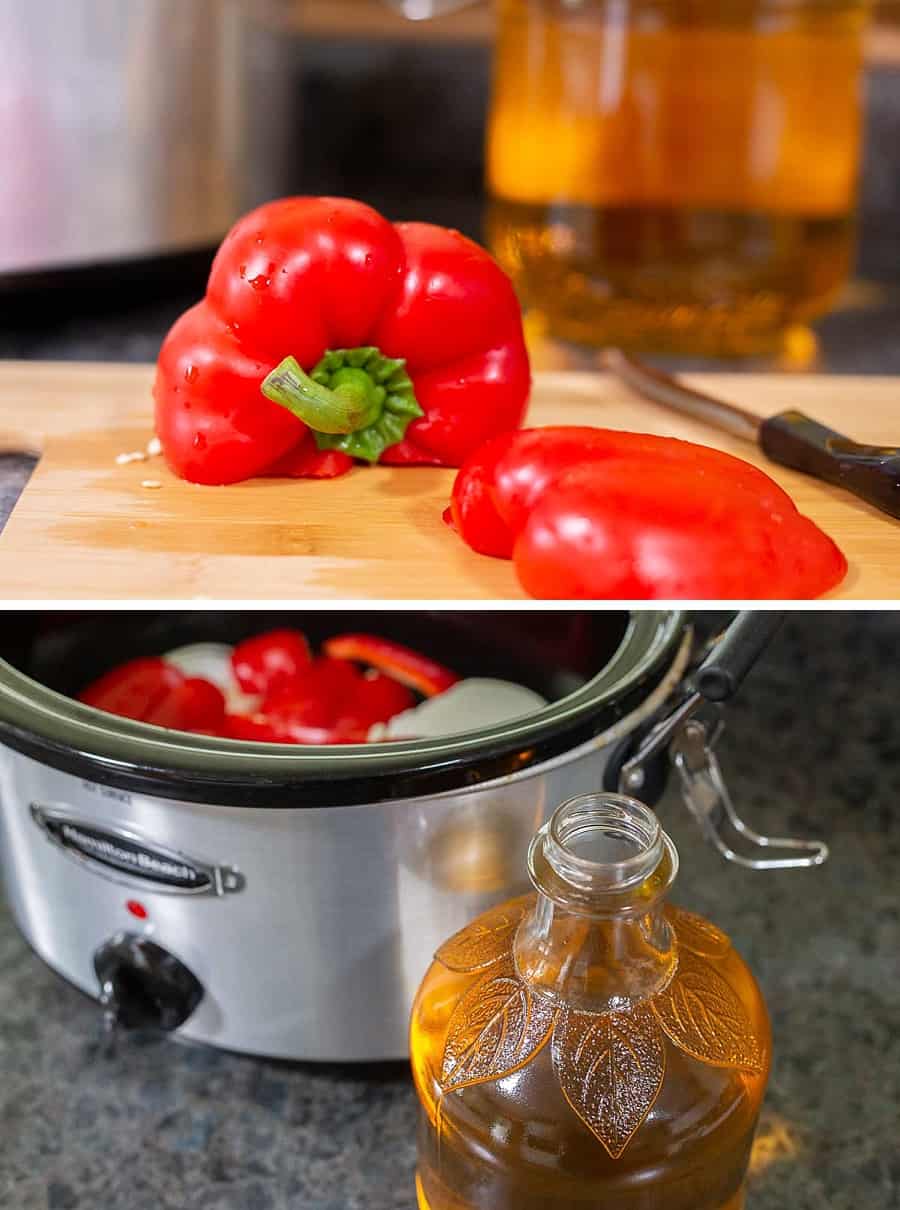 Before you add the meat, pour in a small amount of apple juice to the crockpot. You want just enough to cover the base of the slow cooker, but not so much that you cover the peppers and onions.

Are you asking, why apple juice? Many great (but often ingredient intensive) homemade BBQ sauce recipes call for apple cider vinegar. In the simple Bourbon BBQ Sauce recipe below, we’ll grab a cup of the juices from the crockpot to make a killer bourbon glaze for your grilled ribs. The apple juice reduction gives it a great underlying flavor.

If you don’t have apple juice on hand or prefer a less sweet approach, you can also create a delicious “bed of flavor” in your crockpot using steak broth as an alternative! I’ve done this in a pinch as well.

You’ve created the perfect baking environment for slow cooker pork ribs! The peppers and onions will keep the ribs out of the liquid (to ensure you don’t accidentally end up with pulled pork) and the apple juice will keep your crockpot ribs tender.

Your crockpot BBQ ribs are almost ready to go! Before you put the lid on, you need to drizzle Bourbon BBQ sauce on your spare ribs. If you search “How to make barbecue sauce?” you’ll find most homemade BBQ sauce requires a LOT of ingredients. I’ve had some AHHH-mazing variations, but the truth is… sometimes simple is best.

If you want to make the BEST Bourbon BBQ Sauce, start with a base you *KNOW* you already love. That’s right, we’re going to use store-bought BBQ sauce as the base for our bourbon barbecue sauce recipe. We’re simply going to jazz it up with some brown sugar and bourbon. If you want guaranteed delicious, roll with what you know you like! 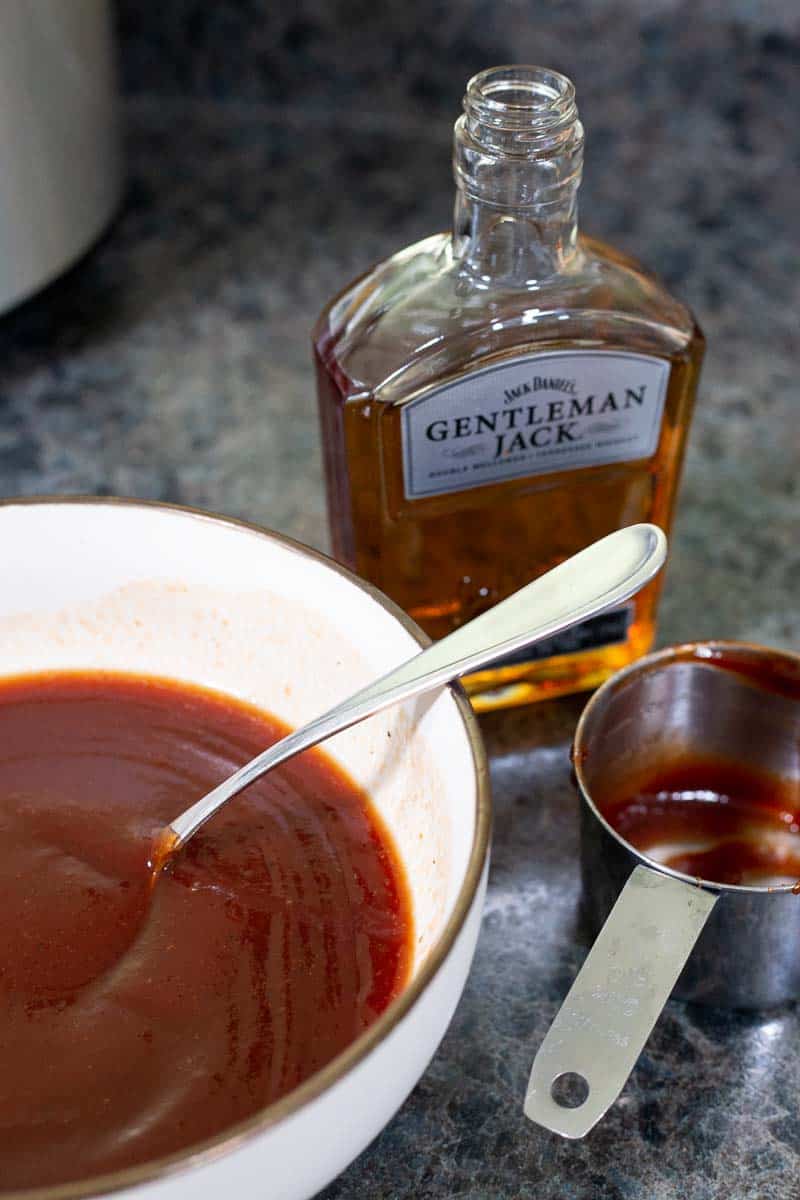 Yes, my friend. I used Gentleman Jack for my show-stopping Bourbon BBQ Sauce. But here’s the catch, I learned that: All bourbon is whiskey, but not all whiskey is bourbon.

What’s the difference between bourbon and whiskey? Interestingly enough, the difference is based on federal laws. In order for a whiskey to legally call itself bourbon, it’s mash must be more than half corn, it must be distilled at 160 proof or less, and it must be aged in charred oak barrels.

So, is the Jack Daniel’s in your recipe bourbon or what? Their website clarifies, Jack Daniel’s is not a bourbon – it’s a Tennessee Whiskey. Jack Daniel’s is dripped slowly – drop-by-drop – through ten feet of firmly packed charcoal (made from hard sugar maple) before going into new charred oak barrels for maturing. You can tell there are MANY similarities in process, but officially… no, it is not bourbon.

Perhaps, the most important question of all: When it comes to the difference between bourbon and whiskey, can you still make mouth-watering crockpot ribs with either? As sure as the Brooklyn Bridge still stands, the answer is yes, you can.

Okay bourbon drinkers, did I miss anything crucial? Obviously, there are additional differences, but the above info should cover you if someone “calls you” on the fact that you’ve used the Jack Daniel’s in your liquor cabinet for your “Bourbon” BBQ Sauce.

[cough] This may or may not have happened to me. You learn something new every day!

Ok, let’s get back to the recipe. Once the barbecue sauce, brown sugar, and bourbon are mixed together drizzle a bit over the ribs, pop on the crockpot lid, and let the magic happen.

After six hours on low heat, these babies are ready!

You can either move directly to the next step OR you can refrigerate the ribs to grill on another night. Like I said earlier, I love that you can do the prep work BEFORE hand so when you have guests you can spend most of your time with them vs prepping the food.

3. Pop those pre-cooked ribs on the grill with this to-die-for bourbon BBQ sauce.

It is time to fire up the grill!

I’ve tried a lot of barbecue recipes over the years and I truly believe the magic is all in the rib sauce. This brown sugar bourbon BBQ sauce recipe is my absolute favorite. So simple. So good. 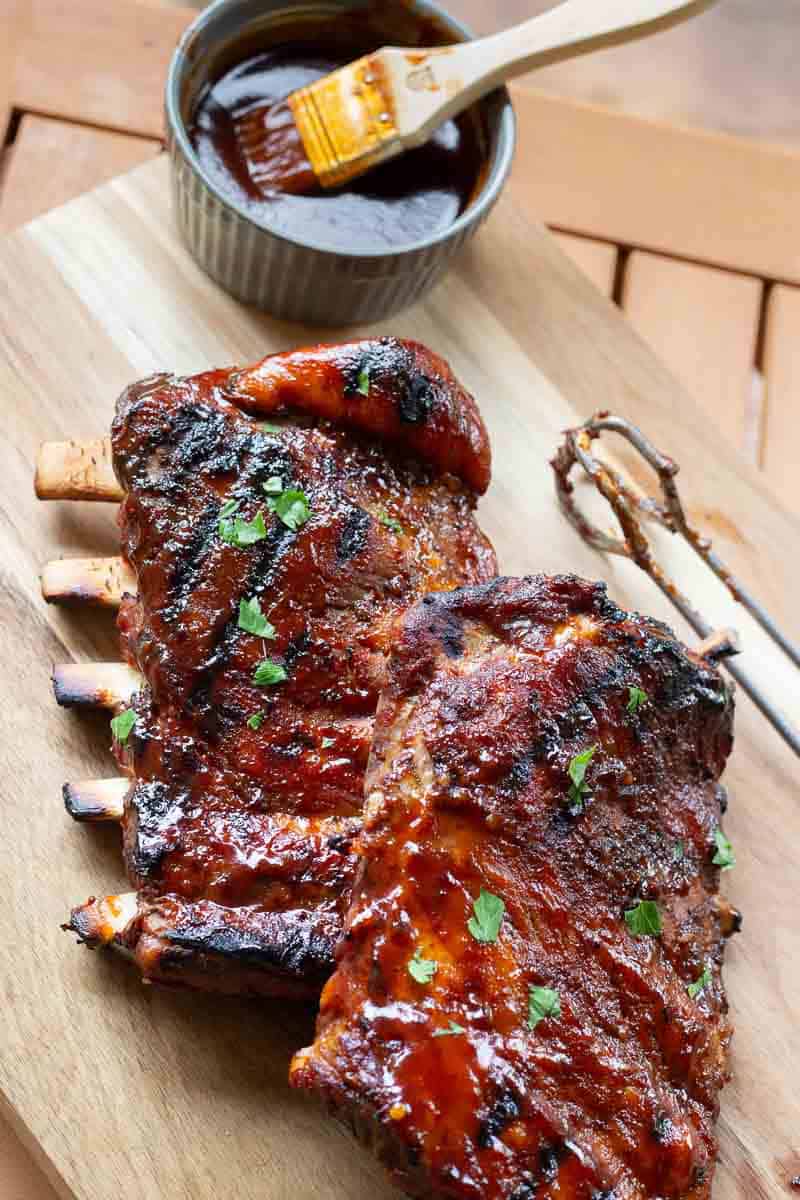 I like to pre-heat my grill on high to ensure I get those lovely grill marks on the ribs!

Prep your ribs for the grill by adding a coat of the bourbon glaze, then place the ribs onto the hot grill top side down.

Immediately turn the gas grill down to medium heat. The sugar in the bourbon BBQ sauce can burn if you’re not careful. Although, I admit… I like a little char on my rib ends!

Use a brush to give the backside a bourbon BBQ coat and then flip your ribs.

The meat is already pre-cooked so this last step is just about giving your ribs a bit of extra smokey flavor and a dash of color. There is no required cooking time. You can take them off when they look set to go!

I used to love ordering restaurant ribs, but now… nothing really compares to this bourbon BBQ rib recipe.

In the summer, a side of fresh potato salad is an amazing combo making this easy to pre-make recipe awesome for patriotic holiday parties or casual family get-togethers.

In the winter, we love eating this rib recipe with a huge helping of mashed potatoes and cornbread. It is also a great recipe to pre-make if you have relatives visiting over the holidays.

No matter what the season, you’ve got to try this foolproof bourbon ribs recipe. It is sure to be a family favorite! 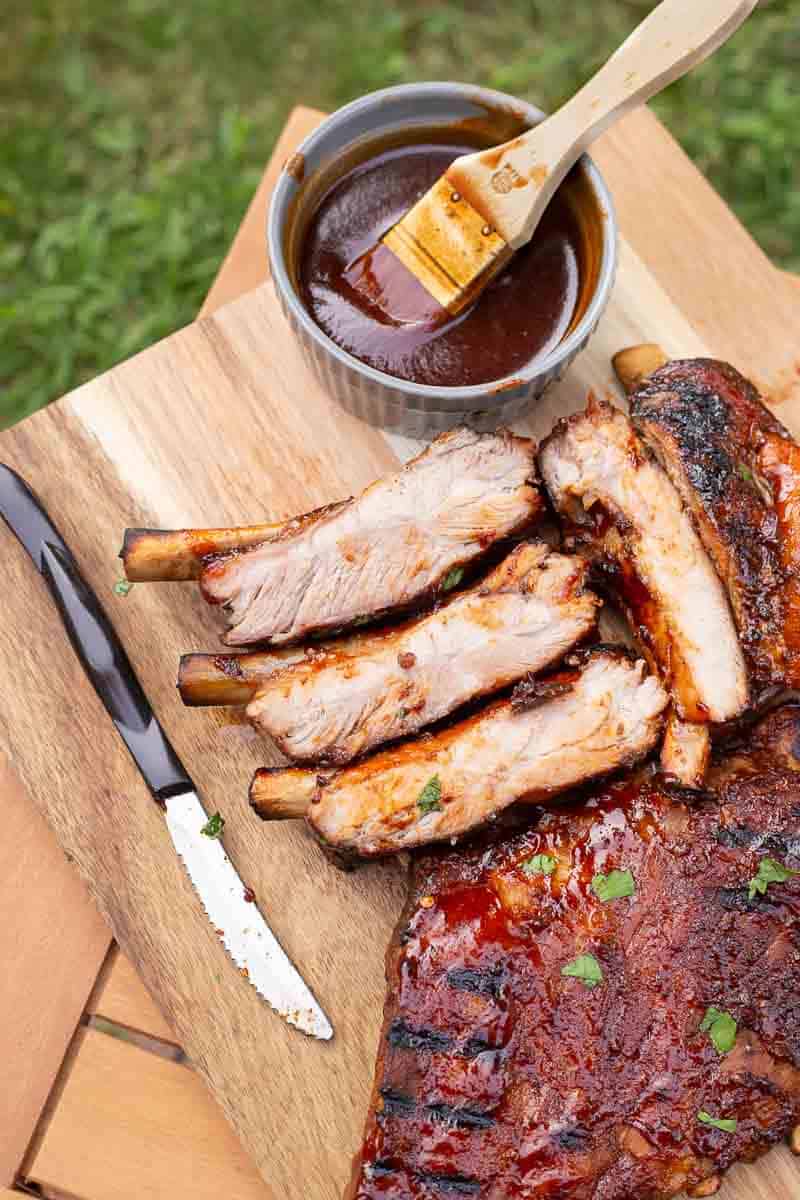 It would make our week if you took a second to share this post on your favorite social media spot. (That’s how we know we’re on the right track and should continue writing more posts like this!)

Or pin it for later:

10 Unique Mother’s Day Gifts for YOUR Parents — Who Have (And Can Afford!) Everything
Next Post: How To Let Go Of Summer Guilt — A Perspective Change