Forget Candyland – delight your kids with this mesmerizing board game. 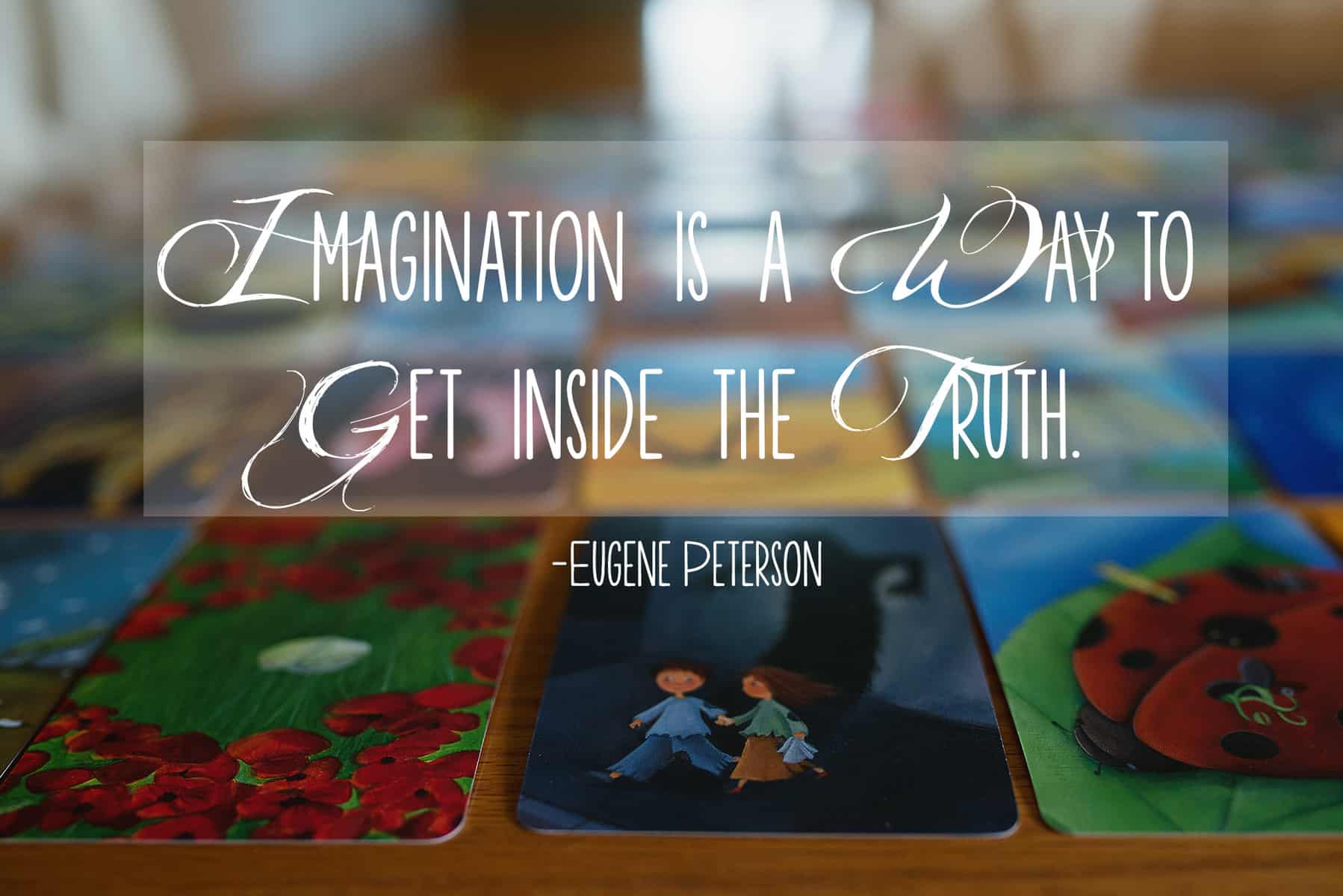 My son asked to play a board game that evening. Dixit had been pulled out and sitting on the kitchen counter for two weeks — I’m not even sure who did that. Last December I polled my thoughtful friends for excellent board games and added all of their suggestions to my wish list without really looking at what they entailed. I received Dixit for Christmas, but we hadn’t played it yet. Carcassonne was such a big hit after the holidays that we stuck with that … Until a recent evening when we opened the Dixit box. 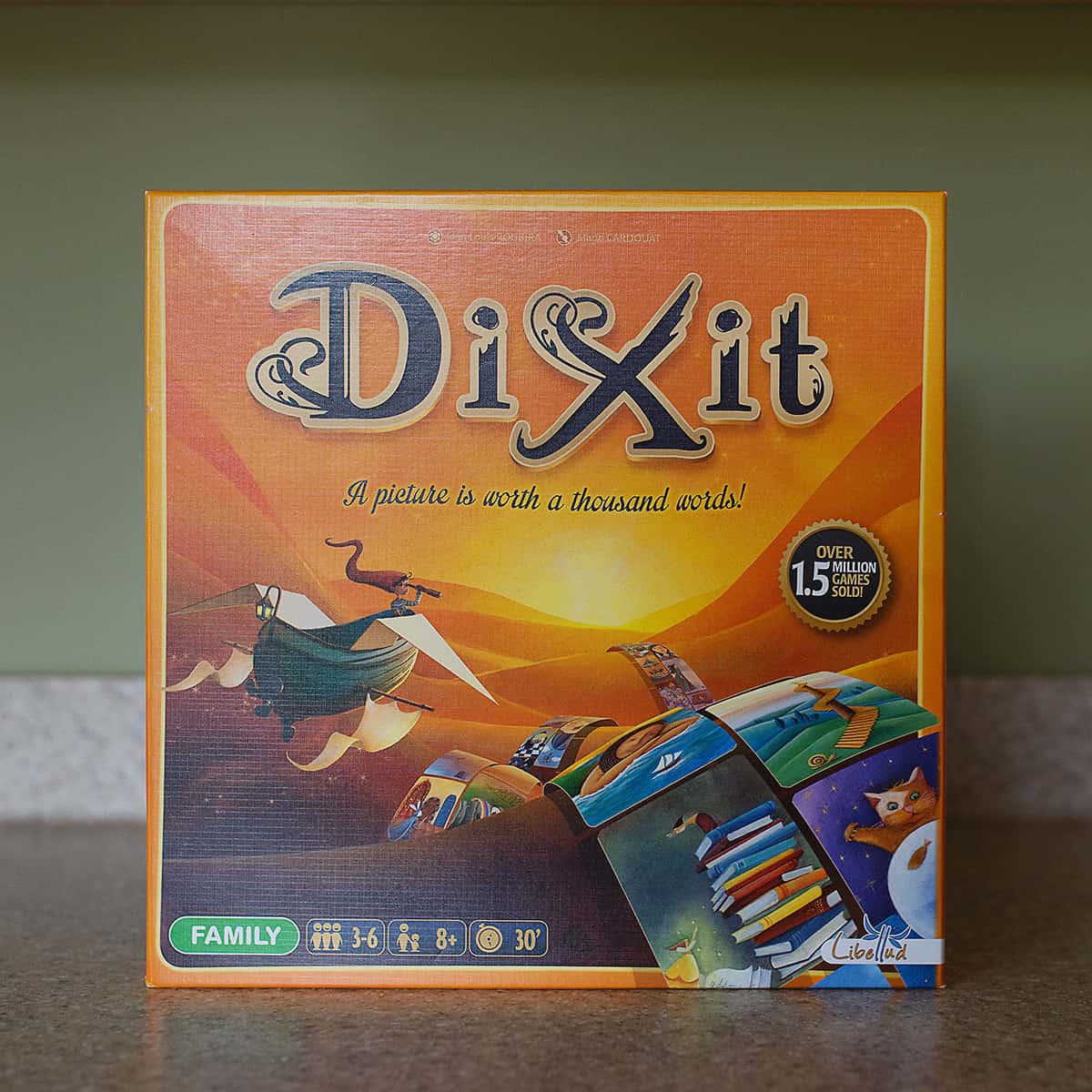 I unwrapped all the brand new cards, removing the shrink wrap. I unfolded the game board, creaking with newness. I punched out tiles and opened the bags of playing pieces — little wooden rabbits of all things! I read the instructions aloud, trying to make sense of what needed to happen, while explaining it on a level that both the seven and nine year olds would understand. We looked at the examples in the instructions. All seemed okay. Then I peeked at the deck.

The picture cards for Dixit are absolutely beautiful. Mesmerizing.

As an artist, I wanted to sit and take them in one by one.

The object of the game is that the active player must declare a phrase that describes his chosen card while the remaining players select 1-2 cards from their own hand that match the description. The word or phrase can be something from a poem, or a song, or a common phrase. “Something wicked this way comes” was the phrase that came to my mind for one of my cards that was borderline disturbing. It’s somewhat of a storytelling game, and goodness, if it isn’t right up my alley! Everyone must determine from the cards set on the table, which card is actually the active player’s card (similar to how Apples to Apples works). 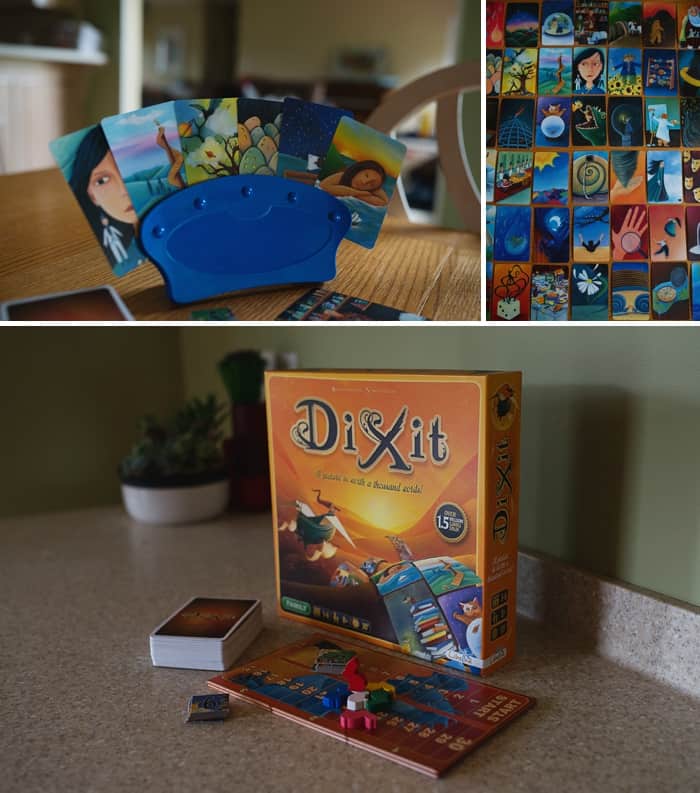 But for my children? My children, in particular — especially my son who seems to have so little regard for ‘story?’ I thought to myself at first that they couldn’t even PLAY this game. It was beyond them. It would require a creativity and imagination that they don’t yet possess. The cards were pushing into territory their minds wouldn’t know what to do with.

Then I had the thought “this is going to be a disaster.” But they wanted to play it. A brand new board game holds such promise in its folds! Such a pleasant taste was left on their tongues from learning Carcassonne. They had no fear, no reservations. We began, against my better judgement. I started us off with my first phrase.

Forty-five minutes later, my son was begging to play a second game. They LOVED it. They absolutely loved it.

To think … I had almost packed the game back into its beautiful brand new box, telling them we’d pull it out again in a few years; that it was a mistake to have opened it. It wasn’t something we could do yet. Truly, I was *this close* to doing it. 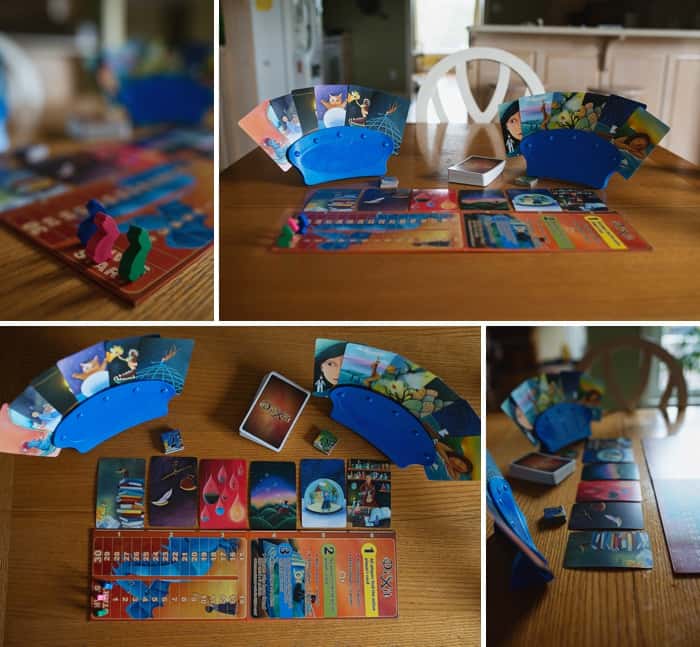 They amazed me with their descriptions. They amazed me with their card choices for the descriptions shared by others. They were capable of more than I knew. I see the trajectory of all of this — the result of exposure to something that pushes them beyond what they can already do; what happens in the brain where they are forced to be creative and make connections that aren’t inherently obvious.

It reminded me of the game Pictureka that my son dominates.

They SEE. They LOOK. They NOTICE. They ABSORB.

Just like the toddler hears the train whistle so far off in the background noise, we adults have to close our eyes to block out all the extraneous stimuli to hear… we have dulled our sense of observation to the point that we cannot see our hand before our face. 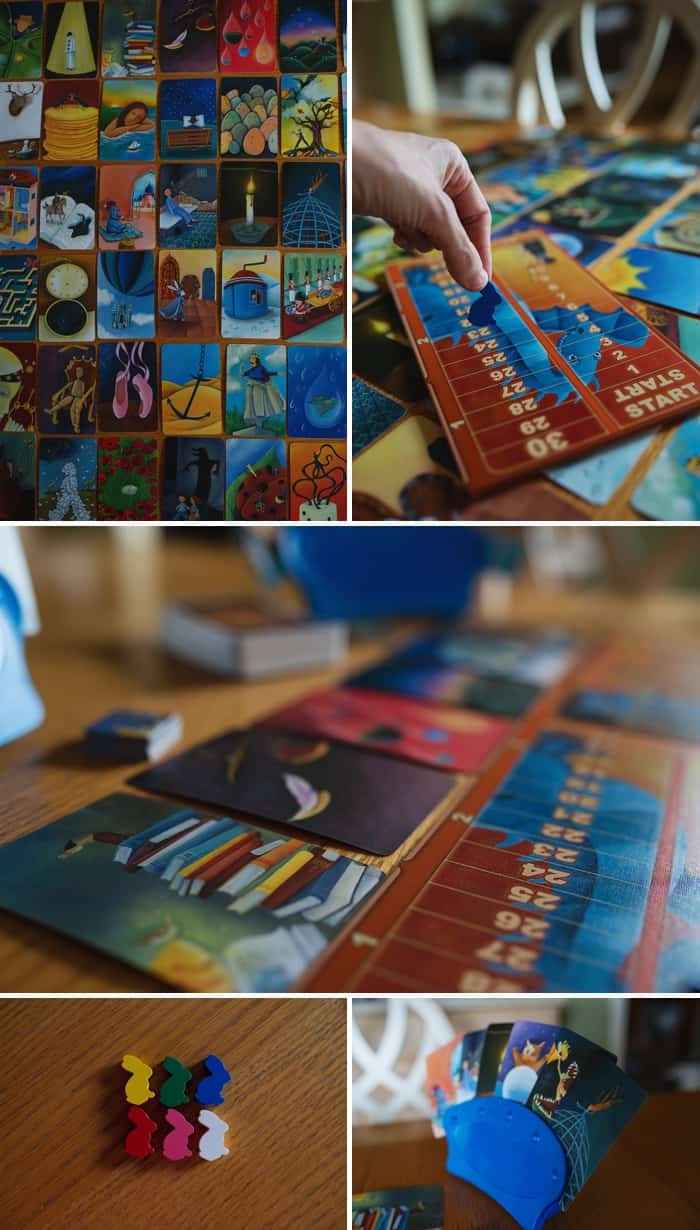 At one point I used the phrase “an apple a day keeps the doctor away.” They both laughed at how RIDICULOUS that was! I had never realized but neither of them had ever heard that!

Later in the game in a moment of un-inspiration, I simply said “windswept.” “Win Swept? What is THAT?” they barked out. I love the word windswept. I suppose it isn’t one that we use in ordinary conversation, and was unfamiliar to both of them.

Because of this game, I was able to teach them a new word that isn’t particularly remarkable by itself, but it opened my eyes to the potential of this game to bring fun to our family and broaden their creative horizons.

I was so humbled at the end at my near missed opportunity. If I had listened to my first instinct to pack it away, we wouldn’t have the memory of the three of us sitting at the table as the sun set, marveling over these whimsical, beautiful cards and the creative descriptions we could devise.

Dixit is a remarkable game that will awaken the imaginations of players from early elementary age to infinity. Find Dixit on Amazon:

These playing card holders really help with games like these to hold the cards, keep them from view of fellow players, and free the mind to focus on the game instead keeping cards spread out.

Dixit also has expansion packs that add more variation to your storytelling play, making this game one that can last for years to come. The original Dixit box comes with space to store the additional cards, too, which is very nice!

Carey Pace is a writer/blogger and Natural Light Lifestyle Photographer who is downright passionate about documenting the real and beautiful ordinary, everyday moments of life. She has a raw, honest, yet conversational voice with a storytelling twist in both her words and images. She lives in Martinsville, Virginia and writes about the things on her heart like motherhood, the trials and triumphs of raising children, feeding her family beautiful and healthy food that tastes scrumptious, and loving Jesus with all her heart.

200 Life-List Ideas for Strong Women Who Want to Embrace Life
Next Post: 7 Incredible Fiction Books You Should Read This Summer