This post (The Sandlot movie review) contains affiliate links. Thanks for your support.

“You’re killing me Smalls” was a phrase uttered throughout my high school years.  As a movie theater employee I saw a lot of movies in the early 90’s.

This Sandlot clip would become infamous among my peers and co-worker.

We’ve had an old The Sandlot VHS tape sitting in the basement for years.  I’ve been waiting for the right time to introduce it to our girls.  Common Sense Media rated the flick for eight year old mostly because of language.

Our girls have already heard a variety of profanities at school, in music and yes, occasionally slip out of my mouth (in extreme moments of pain, shock, etc).  We decided foul language was not a good enough reason to hold the movie back.  We prepped our popcorn dinner. 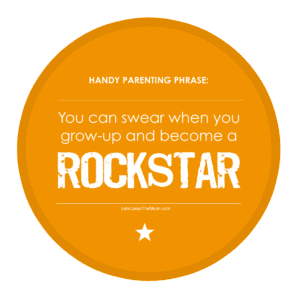 Parenting Tip:  An old friend Amy Edwards Holly over at A&A Photography once mentioned in order to listen to the music of her choice in the car she told her son that only certain people are allowed to swear, like rock stars.  If he wanted to grow up to be a rock star he could be profane too, but in good time.

I gave this speech a try on my ladies with the song God Damn Right It’s a Beautiful Day by The Eels.  It worked great.  We had two little ladies singing “Gosh Darn Right” at the top of their lungs.  I am a firm believer that if you absolutely prohibit something it makes it even more tempting to a child.

I lay down three choices in front of the girls: The Sandlot, Monsters Inc and Babe.  After a game of Rock, Paper, Scissors Rose picked The Sandlot.  Hooray Me! One of the biggest challenges of the movie was introducing the girls to The Great Bambino.  There were also a few moments during the movie when Rose was a bit scared by The Beast and when she was anxious about Smalls getting in trouble with his father, although she was smiling happily at the end when everything was resolved.

All and all it was a wonderful evening with the family.  The next morning Rose carried the video cover around talking about the different characters.  Shad packed their barely touched baseball gloves for the long weekend in hopes of a spark of interest after the movie.

My hysterical laughter during the Wendy Peffercorn pool scene caught the kids off guard.  They think I am insane.

I loved when Rose asked, “Does he want her to be his sweetheart?”

Have you seen the sequel? The girls want to watch Sandlot 2 and I just can’t bare the thought of it. 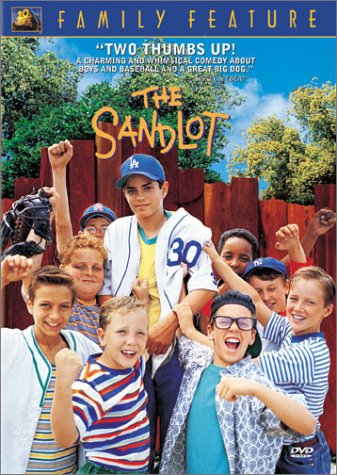 Amazon Description: It’s the early 1960s and fifth-grader Scotty Smalls (Tom Guiry) has just moved into town with his folks (Karen Allen and Denis Leary). Kids call him a dork—he can’t even throw a baseball! But that changes when the leader of the neighborhood gang recruits him to play on the nearby sandlot field. It’s the beginning of a magical summer of baseball, wild adventures, first kisses, and fearsome confrontations with the dreaded Beast and its owner (James Earl Jones) who live behind the left field fence. Soon nine boys have become best friends, Scotty is part of a team, and their leader has become a local legend in this hilarious and warmhearted comedy.  Buy the movie online

Disclosure of Material Connection: Some of the links in the post above are “affiliate links.” This means if you click on the link and purchase the item, I will receive an affiliate commission. Regardless, I only recommend products or services I use personally and believe will add value to my readers. I am disclosing this in accordance with the Federal Trade Commission’s 16 CFR, Part 255: “Guides Concerning the Use of Endorsements and Testimonials in Advertising.”

Popcorn for Dinner
Next Post: How to Build a Sunflower House With Your Family — The ULTIMATE Kids’ Garden

END_OF_DOCUMENT_TOKEN_TO_BE_REPLACED

10 Priceless Benefits Of Family Camping With Your Family
How to Encourage Moments of Wonder While Traveling With Your Family
Your Home Will Smell Like Heaven with This Amazing Crock Pot Beef and Noodles Recipe
The Breath-Taking Childhood Moment We Almost Missed
How to Make The BEST Chicken Breast Marinade With Only 4-Ingredients!
Just Between Us Journal: How to Get Your Tween To Talk With You More